China and the U.S. have quietly started negotiating to improve U.S. access to Chinese markets, after a week filled with harsh words from both sides over Washington’s threat to use tariffs to address trade imbalances, people with knowledge of the matter said.

The talks, which cover wide areas including financial services and manufacturing, are being led by Liu He, China’s economic czar in Beijing, and U.S. Treasury Secretary Steven Mnuchin and U.S. trade representative Robert Lighthizer in Washington.

In a letter Messrs. Mnuchin and Lighthizer sent to Mr. Liu late last week, the Trump administration set out specific requests that include a reduction of Chinese tariffs on U.S. automobiles, more Chinese purchases of U.S. semiconductors and greater access to China’s financial sector by American companies, the people said. Mr. Mnuchin is weighing a trip to Beijing to pursue the negotiations, one of these people said.

“Secretary Mnuchin called Liu He to congratulate him on the official announcement of his new role,” a Treasury spokesman said. “They also discussed the trade deficit between our two countries and committed to continuing the dialogue to find a mutually agreeable way to reduce it.” 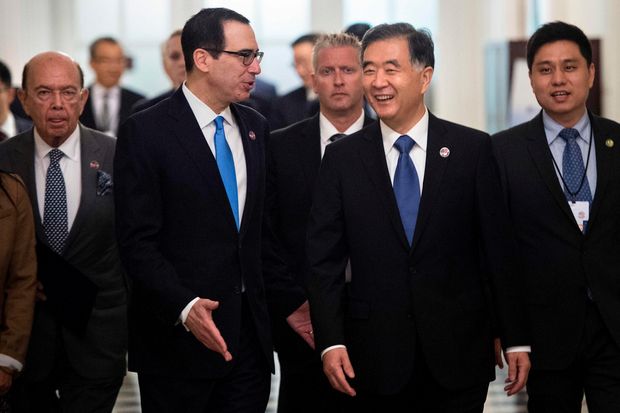 The behind-the-scenes discussions might come as relief to those rattled by announcements last week of U.S. plans to hit China with tariffs, investment restrictions and other measures aimed at addressing the U.S.’s $375 billion merchandise trade deficit with the world’s second-leading economic power. The announcement—and the immediate threat of Chinese retaliation—sent U.S. stock prices into a sharp decline.

Mr. Trump last week hinted the U.S. was employing both carrot and stick. “We’ve spoken to China and we’re in the midst of a very large negotiation,” he said on Thursday as he announced he was threatening China with tariffs on as much as $60 billion in imports and other restrictions. “We’ll see where that takes us.”

Although Beijing reacted angrily to the U.S. tariff threat, Chinese officials have been careful not to escalate the fight by much. China’s Commerce Ministry accused the U.S. of “setting a vile precedent,” and rolled out penalties against $3 billion in U.S. goods including fruit, pork, recycled aluminum and steel pipes. The ministry said those measures were aimed directly at new U.S. tariffs on Chinese steel and aluminum.

Yet so far, China hasn’t included on its retaliatory list any mention of the biggest U.S. exports to China such as soybeans, sorghum and Boeing Co. aircraft, which to some observers underscores Beijing’s willingness to negotiate a solution with the Trump administration.

Mr. Liu told Mr. Mnuchin in their phone conversation that Washington’s recent trade offensive against China would hurt both countries and the world, the official Xinhua News Agency reported, and he expressed hope that the two sides can work together to “maintain the overall stability of their economic and trade relations.”

Mr. Trump has said he wants China to reduce the bilateral trade deficit by $100 billion. As part of that, he is looking to boost sales of U.S. cars and semiconductors in China.

“The word that I want to use is reciprocal,” he said last week. “When they charge 25% for a car to go in, and we charge 2% for their car to come into the U.S., that’s not good,” he said. The U.S. actually assesses tariffs of 2.5% on imported cars; China’s is 25%. In other areas, the U.S. has higher tariffs than those charged by trading partners, including a 25% tariff on imported pickup trucks and stiff levies on some agricultural products like peanuts.

Washington is also considering the possibility of pressing Beijing to shift some of its semiconductor purchases to U.S. companies from Japanese and South Korean ones, people familiar with the talks said.

The U.S. side believes the threat of import tariffs gives Washington leverage in pushing for big changes. But critics of the effort warn that forcing China to negotiate under such circumstances might backfire, because any concessions would be seen as bowing to foreign pressure and embarrass the Chinese leadership.​

“We’re working on a pathway to see if we can reach an agreement as to what fair trade is for them,” Mr. Mnuchin said on Fox News Sunday. Such a deal would include Beijing opening its markets further to U.S. exports, reducing its tariffs and stopping pressure on U.S. companies in China to transfer their technology to Chinese joint-venture partners, he said.

The U.S. is also pressing China to ease restrictions on U.S. financial businesses, particularly requirements that they operate as joint ventures under which U.S. firms are in many cases limited to 51% ownership.

For the past few months, amid a suspension of the formal bilateral trade dialogue, Chinese officials had been looking for specific demands from the U.S. and had been frustrated over a lack of clarity from the Trump administration.

Mr. Liu also met U.S. corporate leaders and other business representatives as he sought to restart the dialogue. At those meetings, the U.S. participants gave Mr. Liu advice on what China would need to do to put relations with the U.S. back on an even keel, individuals with knowledge of the exchanges said.

Among the things suggested to Mr. Liu: accelerate financial liberalization and expand its scope; reduce subsidies to state-owned enterprises; reduce tariffs on autos; provide more regulatory transparency; and end requirements that American firms must enter into joint ventures with Chinese companies to access the Chinese market. Mr. Liu didn’t make commitments at the time, the individuals said, but said he was grateful to hear specifics.

Now, as the two sides have resumed high-level talks, the U.S. is also watching what Mr. Xi will say at the Boao Forum, an annual gathering of world political and business leaders on the southern Chinese island of Hainan in April. Some observers said they expect Mr. Xi to announce plans to allow greater foreign access to markets such as insurance.

“If they open up their markets, it is an enormous opportunity for U.S. companies,” Mr. Mnuchin told Fox News Sunday. “I am cautiously hopeful we reach an agreement, but if not we are proceeding with these tariffs.”

Here at Dollar Destruction, we endeavour to bring to you the latest, most important news from around the globe. We scan the web looking for the most valuable content and dish it right up for you! The content of this article was provided by the source referenced. Dollar Destruction does not endorse and is not responsible for or liable for any content, accuracy, quality, advertising, products or other materials on this page. As always, we encourage you to perform your own research!